Hickory Point Fire Protection District was created in1955 by a group of citizens living north of Pershing Road, Decatur, Illinois and in the Village of Forsyth. At that time, fire protection did not exist in the area except through calling Decatur fire department or neighboring towns. The area north of Pershing Road was unincorporated, but beginning to experience subdivision development. The Village of Forsyth's population in the 1950s was less than 500. Today, the district includes the Village of Forsyth, parts of north Decatur, and parts of Hickory Point township. The resident population is approximately 5200 with a day time working and travelling population of more than 15,000. Steady residential and commercial growth has been the norm since the building of the Hickory Point mall in the late 1970s. The district sits at the intersection of U. S route 51 and Interstate 72. Farmland and a small number of working farms are included in the district.

The Hickory Point Fire Department provides fire, rescue, and emergency medical services to the district. The district is governed by three trustees appointed by the Macon County board. Membership includes thirty-one volunteers including three paid, daytime employees. Services are provided by members trained to the firefighter II and III level, hazardous materials operations/technician, trench operations, rope rescue, instructor I and II, extrication, and emergency medical technician level B. The fire station is located in the Village of Forsyth and fire district ISO rating is a 4. 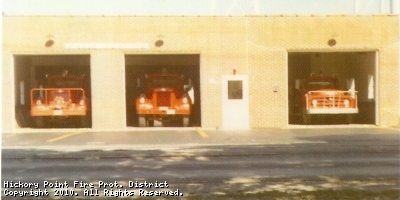 To join as a volunteer firefighter, you can pick up an application at the fire station between 9 and 4:30 p.m. on weekdays. Fourteen is the minimum age for a Cadet member and eighteen for volunteers. Consideration is given to those who live within the original fire district boundaries beginning at Pershing Road on the south.

Copyright © 2006-2020. YourFirstDue Inc. All Rights Reserved. Designated trademarks and brands are the property of their respective owners. Content on this web site is supplied by Hickory Point Fire Prot. District. YourFirstDue Inc. cannot be held responsible or liable for any content, text, pictures, or any other media found on this web site. Maintained by the members and staff of Hickory Point Fire Prot. District.
Management Login
Powered by